The results speak for themselves...

The new 20ml injection blow moulded HDPE screw neck bottle supersedes the former extrusion blow moulded bottle as both the quality and dimensional accuracy have been significantly improved, facilitating a perfectly fitting overcap which has a consistent opening force.

Accidental actuation of the pump has now been removed as the overcap covers and protects the whole upper part of the bottle and pump.

The new bottle system was developed based on the idea of improving the hygiene of the nasal pump. The opening at the top of the pump now remains protected in it's closed state, which means that it is uncontaminated from external influences including dust and dirt as well as removing the liquid build up which can be caused by accidental actuation of the pump.

Further advantages of this system are that the overcap and bottle can be created in any colour and the caps can be made transparent, adding to the point-of-sale impact as well as the increased labelling area, which can be used to include detailed instructions. 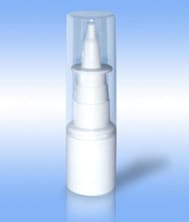